Home » »Unlabelled » Going behind the scene with Akram Hidou

Going behind the scene with Akram Hidou

Film: Halabja - The Lost Children
Producer, Scriptwriter and Cinematographer: Akram Hidou
Editor: Franziska von Berlepsch
Composer: MikailAslan, CiwanHaco
Participants: Fakhradin Haji Salim, Ali Simnako Mohammed Ahmed
Duration: 72 minutes
Akram Hidou is a Kurdish Syrian, who works as an independent filmmaker, cinematographer and producer. His film, Halabja- The Lost Children, is nominated in the category of the official competition- Gulf Features. The film revolves around Ali, who visits the cemetery of Halabja in Kurdistan, Iraq and is speechless in front of a tombstone with his name engraved on it. 21 years after Saddam Hussein’s poison gas attack in 1988, Ali returns to Halabja looking for his lost family. Meanwhile, five families have their hopes pinned on him to be their missing child. 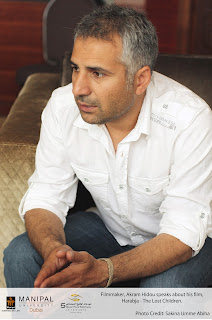 “The idea struck to my mind when I had visited Halabja in 2007, where I studied for a month. During this period, I learned that about 300 children were lost since 20 years due to the horrific incident that gripped the city in 1988,” said Akram Hidou.
“Talking to the families who have lost their children was indeed a difficult task. The incident, as well as the trauma, was still fresh in their minds, but they refused to provide details, as it was a tremendous discomfort to them.” Hidou relates Halabja- The Lost Children to his hometown, Syria, where innocent lives are swept away in bloodshed due to political chaos. The director hopes to spread out a message of the impact of violence and political bedlam, and he expects the audience to digest the meaning of the film easily so that no other country or family has to experience such grief ever again.
According to him, Gulf Film Festival is an extra-ordinary way to bring out talent and allow filmmakers in the region to shed light on the various problems of the society and raise awareness about them.
By Maria Hussain
Posted by MANIPAL DUBAI BLOG at 12:07 PM