Look out for the walking dead at GFF’12

It’s a Zombie ruckus this year at Gulf Film Festival 2012, with movies featuring the “living dead” premiering for the very first time in the U.A.E; one such horror flick debuting this year is Isa Swain’s Envy the Dead.
Hassad al Mota (Envy the dead) is an enthralling horror movie with conventional zombie hue and cry. Written and directed by Isa Swain, the film revolves around a lone survivor of a Zombie pandemonium that plagued the entire city, and his encounters through the deadly wreckage. 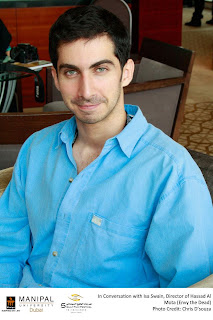 Set up in Abu Dhabi, with post production in Bahrain, Envy the dead is a distinctive zombie movie and the very first of its kind in the Middle East. While in conversation with Swain on his directorial debut, he seemed very pleased with his accomplishments as the very first Arab filmmaker to direct a Zombie movie in the region.
“I have a deep liking for horror” said Swain when asked why he had chosen this genre of filmmaking. “Horror is a way of talking about things without talking about them, Horror is all about metaphor, and everything in horror represents essentially something human.” Isa explained. When asked what inspired him to make the very first zombie movie in the gulf region, Swain claimed his love for horror especially zombies along with the fact that it was never done before drove him to make the first Arab horror film.
Uncertain of the immediate reaction from the viewers, Swain hopes his directorial venture; Envy the Dead grabs as much attention as possible. Praising Gulf Film Festival for providing enough exposure to the budding film makers, Swain added GFF was the first to acknowledge his work in the Middle East.
By Fathima Layeek
Posted by MANIPAL DUBAI BLOG at 12:14 PM