A ‘Th!nk and Dr!ve’ campaign was organized by the students of Advertising and Public Relations specialization of the Media Department at Manipal University, Dubai as part of their course subject. The campaign was held to spread awareness about road distractions and safety.
The Roads and Transport Authority (RTA) had joined hands with the Advertising and Public Relations specialization to promote the campaign and highlight all aspects of road safety.
As a part of the campaign a few events were held within the University to educate the young crowd about the do’s and don’ts of driving.
· The campaign started off on 10th April, 2012 with a seminar to educate the students about the distractions faced while driving. The seminar was enlightened by the honourable speaker, Ms. Amal Yousef from the Department of the RTA. Ms. Yousef spoke in detail about the various commotions and consequences faced by a driver on a daily basis. To make the audience have a lasting impact she assisted her message with a few interesting funny videos. Apart from spreading awareness Ms. Yousef also shared a list of precautionary measures which have to be undertaken while driving.

· The Seminar was followed by a Roll-Over Car demonstration on 17th May, 2012 on the grounds of Manipal University. The demonstration was set up by the Road and Transport Authority (RTA) along with Emirates Driving Institute (EDI) who wanted all the students to experience the feeling of meeting up with an accident and getting rolled over, the main emphasis of this demonstration was to wear seat belts. An instructor from the Emirates Driving Institute (EDI) spoke to the students about the importance of the seatbelt while travelling in a vehicle. Apart from the Roll-Over car demonstration, there were also demonstrations about driving at night and drinking and driving, this former was to make the students know how cautious they should be while driving late hours, the later was the to show the students the chances of meeting up with accidents because of drinking and driving. 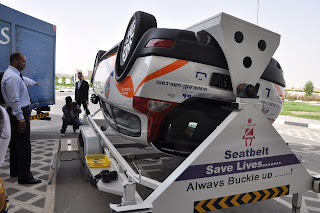 
· Following the Roll-Over Car demonstration it was now time to bring about awareness amongst the Manipal University, Dubai drivers who transport the students daily to and fro University. On 29th May 2012, a seminar was held within the college premises where the student organizers once again came together and discussed various scenarios with the drivers of our University. A presentation complied with studies, figures, cases and videos were made by the students and appropriately presented to educate the drivers about the importance of cautious driving and road safety.
By Amrutha Pushparajan
Posted by MANIPAL DUBAI BLOG at 5:33 PM