Organized and managed by the Department of Engineering students of Manipal University Dubai, Technovanza is pioneer of science and technology festivals in UAE. It is UAE's largest annual science and technology festival that aims to promote eco-friendly technology through path-breaking initiatives. Technovanza also provides a platform to students to showcase their talents in the field of science and technology.
The opening ceremony took place on 1st May, 2012, that invited chief guest Richard Merchant and guest of honour, Michael Miotk. The event started off with a prayer song by Gokul, followed by a dance performance by Vishnu Priya, both Engineering students.
According to Dr. Kota Reddy, Chairperson of Engineering Department, “This year, Technovanza is a special one because it’s being held in our new campus, and it has been organized by the Engineering Department, that will see its first batch being graduated this year.” 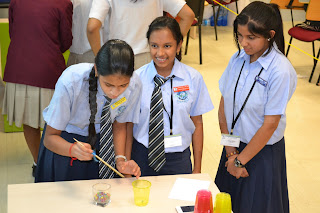 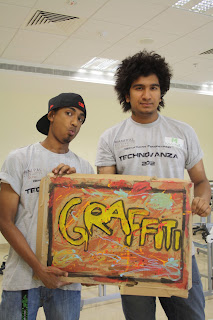 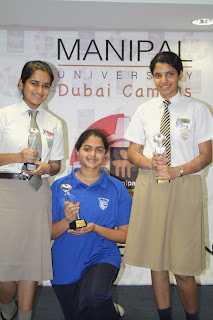 He also added that this year, the event also involved inter-school competition, which made a massive difference and was a huge attraction.
The main objective of Technovazna is to improve technical knowledge of students and promote team work, along with communication skills.
An introductory speech was given by Dr. Ramjee, the Director of Manipal University, Dubai in which he commented on the department's ability to provide internships, organizing industry visits that give them the right exposure as well as providing placements before they gradaute.

The inter-school competitions attracted most of the attention. The inter-university activities and competitions included Clash of the Coders, Technical Quiz, Car Design, Bridging the Gap, Contraption, Electrovanza, Clay Art, Aero design, Innovative Drawing and Exhibitions.
The laser maze definitely served as a unique attraction at Technovanza this year. Mr. Suresh B., Senior Lecturer for the Electronics and Communications specialization who led his group of students in creating a layout and design for the circuits in laser maze said, "I'm impressed and very happy by the teamwork put in by my students in controlling and handling the laser maze as well the huge crowd that turned up for the event. This year we attracted more than 200 school students to be part of Technovanza."
Yunus Farhan, second year Engineering student who specializes in Electronics and Communications was in charge of the laser-maze said, "The circuit design was really complicated and difficult but we succeeded in making it. Technovanza was organized on a much larger scale this year. Students from RAK colleges and various colleges across UAE also attended this event. I am really proud of this event."
School students also actively took part in this event. According to Abbas Ali Agha, a 10th grade student from Arab Unity School; a gamer and a first time attendee for Technovanza said, "I had lots of fun at Manipal. I participated in FIFA'12 and Blur, also a semi-finalist for the FIFA'12. Technovanza was very well organized."
The closing ceremony took place on 3rd May, 2012, where Dr. Ramjee launched the department’s annual publication, 360 Degree magazine. The event also commended academic achievers and appreciated all event organizers and sponsors.
Overall, Technovanza 2012 was a huge success that keeps getting bigger and better every year.
By Maria Hussain and Qudsiya Siddiqui
Posted by MANIPAL DUBAI BLOG at 9:37 AM