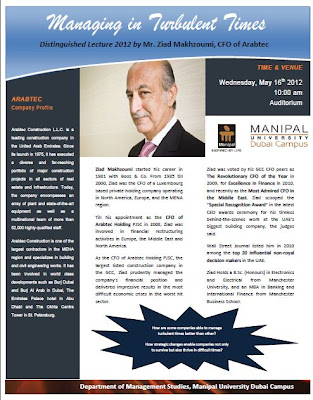 The Department of Management Studies cordially invites you for the lecture on “Managing in Turbulent times” by Mr. Ziad Makhzoumi on Wed 16th May, at 10 am in the Auditorium.
Mr. Ziad Makhzoumi is the Chief financial officer of Arabtec Holding PJSC. Arabtec Construction is one of the largest contractors in the MENA region and specializes in building and civil engineering works. It has been involved in world class developments such as Burj Khalifa and Burj Al Arab, The Emirates Palace hotel in UAE, and the prestigious Okhta Centre Tower in St. Petersburg.

The recession hit UAE since 2008 and obvious effect was seen in the construction industry. However in the 12 months since July 2008, under Makhzoumi’s financial leadership, the company’s share price on the Dubai Financial Market rose a staggering 260% - and is now worth nearly $3 billion- an achievement the business community would be proud of.
He has been awarded the Hall of Fame Award for the Most Admired CFO in the Middle East which is presented to a CFO/CEO from a public/private/government sector,2010.
You can find the Auditorium in Block A, 3rd floor.
Follow us for further updates.
Posted by MANIPAL DUBAI BLOG at 9:53 AM