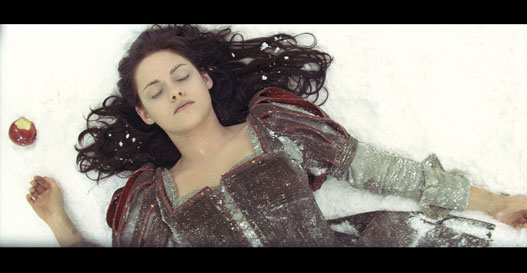 
We all know the story of Snow White; The beautiful princess, the evil stepmother, the seven dwarfs, the poisoned apple and the happily ever after. To tell a story whose ending is already known by the audience is a challenge but director Rupert Sanders did provide us with a new perspective to the familiar fairytale.  He helps build a very strong contrast between the evil and the good. The dark forest, the black magic scenes of the evil stepmother, the haggard state of the citizens heavily contrasts with the magical forest of the dwarfs, the tiny fluttering fairies and beautiful lush green of the forest.

However what fails in the movies is the storytelling, like in the middle of the filming they realized that they still have a lot say and they decided to squeeze in as much as possible. Some scenes seemed unnecessary and some key scenes seemed missing.  Even though story consists of all the elements of a good movie like action, romance, drama and so on, the way these elements have been put together is wrong.

When it comes to acting all I can say is why? Why Kristen Stewart?  It looked like a vampire sucked the life out of Snow White. She seemed like she was doped rather pure and beautiful. The director tries to bring a life in her character through the motivating speech she gives in the end but unfortunately it didn’t hit the mark.

I was actually looking forward to seeing Chris Hemsworth in a different role than Thor but his moves with the axe were kind of similar to the moves he had with the hammer. The chemistry between the two definitely failed and both characters don’t clearly establish themselves. Charlize Theron really tried hard but her character was swinging between self-pity and loud tantrums. Even though they try to show a background story to her “evilness” we don’t really sympathize with her. This is one of the few movies where the supporting actors seem to excel the primary ones.

You can watch the movie for its beautiful cinematography and fresh perspective and also if you like making fun of Kristen’s awful acting.

The writer is a Media and Communications student specializing in Journalism.
Posted by MANIPAL DUBAI BLOG at 11:27 PM

I find this review criticizing based on stereotyping, I found Kristen Stewart perfect for the role and heavenly beautiful. Please watch the scene where she wakes up in the forest. I froze the scene there just to look at the beautiful moment. And please know that I'm unbiased on everything and would like you to be one while reviewing movies because people would miss out the good things by choosing not to see the movie based on a negative critique.

I think the biased answer is coming from you who think Kristen Stewart looks good so her bad acting can be accepted I dont think my view about her acting skills is biased as the maximum number of the reviews on this movie critisize Kristen's acting skills. I have nothing against her because I actually liked her acting in movies like The Runaways and Speak. My movie review is not a the final word here as an intelligent viewer you still got the choice to watch the movie or not. As a critique I will critisize if I need to.