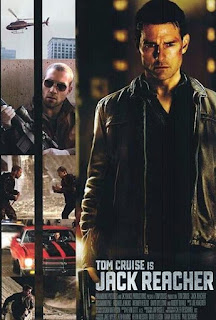 Jack Reacher is based on the popular Lee Child novel ‘OneShot’, and follows the title character as he investigates the murders of five random victims of a sniper shootout. The movie begins with a sharp-looking sniper, selecting his victims through a sniper scope and then quickly eliminating them in one brisk shot. The police investigate and arrest the suspect, who they believe is the shooter.  During his interrogation he says nothing, but on a notepad he writes ‘Get Jack Reacher’.

The following scene has two police investigators reading up on Reacher with the conventional dialogue of a tough as nails guy, served in the military, brilliant investigation skills, numerous awards and the ever so clichéd, “Can’t find him, unless he wants to be found”. This marks the entry of Jack Reacher, portrayed by a younger (note that he is now 50 years old!) looking Tom Cruise with a broad physique and a no-nonsense look on his face, who’s there to learn why the man he despises the most has asked for his help.

If I go on anymore, it would be a spoiler of a review. Just know that there's a huge conspiracy at play, shrewd detective skills and hardened military training - that gives you a couple of good fights to watch and like a Christmas present wrapped in a bow, this film has a brilliant thundering car chase sequence that ultimately leads to uncover the truth.

The supporting cast although credible in their performances somehow fell flat and redundant half way through the movie. Rosamund Pike started off very motivating, but her character lacked the anxiety and urgency once the plot started to thicken. The addition of legendary German film-maker WernerHerzog as the film’s spooky villain seemed quite intriguing at first, but he was reduced to nothing more than a shadowy figure simply lurking in the background.

Although quite late into the movie, a magnificent special appearance from the seasoned Robert Duvall as Reacher’s sidekick provided excitement and thrill to a climax that was quickly losing its momentum.

Lastly, a splendid performance by Jai Courtney as the master assassin is proving he has the mettle to grab a foothold in Hollywood. He put up a tough fight against Tom Cruise in the finale and next spring he will rub shoulders with another Hollywood heavyweight - Bruce Willis in ‘A Good Day to Die Hard’.

Jack Reacher is Tom Cruise’s show from the very first moment he enters the frame. His performance as the judge and executioner to those who think they are above the law pays homage to a modern age persona of HarryCallahan aka Dirty Harry.

The film clearly does have its flaws with underused performances and unexplained sub plots, but these can easily be overlooked due to the movie’s thrilling momentum and Tom’s onscreen persona. It’s not the usual over the top movie audiences have come to expect from Cruise’s previous films, but a rather down to earth execution makes Jack Reacher a first-rate action thriller.

The writer is a second year postgraduate student pursuing MA Media and Communications and specializing in Television and Video Production.
Posted by MANIPAL DUBAI BLOG at 2:35 PM