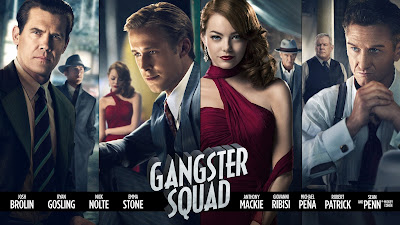 If I were to describe the film, Gangster Squad in two words, they would be bloody  brilliant! Actually make that bloody and brilliant. It does not reach the movie Lawless in its level of gore, but it comes close. The stylized noir crime drama grounded in a "based on a true story” plot setup revolves around LAPD officers and detectives forming a group called the "Gangster Squad unit" who attempt to keep Los Angeles safe from powerful con, Mickey Cohen (played by Sean Penn) and his gang during the 1940s and '50s.
In terms of acting, the entire cast played their roles to perfection. Particularly noteworthy performances were by Ryan Gosling, the cop of a few words; Sean Penn, the angry mobster and Emma Stone, the stunning, innocent girl caught up in a world of cops and crime. The movie is wonderfully directed by  Ruben Fleischer (best known for Zombieland) with some action scenes that just guarantee to take your breath away, particularly towards the end.


Watch the trailer: Gangster Sqaud
However, on the down side, the movie did have some minor flaws: Personally I felt that the pace was irregular and the movie came close to releasing too much tension, however it usually made up for it, in the next scene. Violence was so dominant yet taken very lightly in Gangster Squad leaving the audiences quickly desensitized to death and gore. This clearly justifies the reason why the film's release was postponed from September to January in the wake of the 2012 Aurora shooting.

There were certain characters such as Officer Max Kennard played by Robert Patrick, Officer Navidad Ramirez played by Michael Peña and Officer Coleman Harris played by Anthony Mackiewho who did not seem fully developed and a bit more perspective and depth as characters would have been welcome.

However despite the flaws, director Fleischer and scriptwriter Will Beall (who is writing Justice League) have succeeded in making every scene as entertaining as the last, keeping viewers interested and excited throughout the film. Without giving too much of the plot away, I can safely say that Gangster Squad is a must watch mobster movie that I would rate 8.7 out of 10.
Behavioural warning: After watching the movie, males should expect the sudden urge to wear suits.
By Tarish Tolani

The writer is a first year undergrad student pursuing Media and Communications. He is also the President of the Student Film Club (2012-2013).


Have you watched the film? Comment below and tell us what you thought of it. Do you agree with Tarish's review? Do you think that "Gangster Squad" would be as successful and enjoyable without the gore?
Posted by MANIPAL DUBAI BLOG at 1:28 PM