“I once had a girl, or should I say, she once had me…
She showed me her room, isn’t it good, Norwegian wood?”

These lines from the Beatles’ song ‘Norwegian Wood’ inspired the title of Haruki Murakami’s most famous book of the same name. ‘Norwegian Wood' made him nothing short of a superstar in his home country, Japan, much to his dismay. This is a book about love, sorrow, loss and growing age. Set in the ’60s in Japan, it has much to offer to every reader. It’s the story of being at crossroads, between the past and the future.
When he hears the song Norwegian Wood, Toru is transported to his college days in the 60s and his love for two women, Naoko and Midori. Both are complete opposites and Toru is confused. Toru is yet haunted by his best friend Kizuki’s unexpected suicide, when he was 17. Naoko, Kizuki’s girlfriend was much like his soul mate and along with his death; Naoko lost a part of herself. Toru meets Naoko and they share many walks around the city, during which their feelings for each other aren’t revealed.
Suddenly, Naoko feels a mental imbalance and she moves to a secluded sanatorium near Kyoto. Around this time, Toru meets Midori, who is everything Naoko is not – lively, carefree, open and alive in the fullest sense. While Midori falls in love with Toru, Toru is still torn with his feelings for Naoko, who is quite unattainable. The rest of the story forms how Toru decides between the two women. 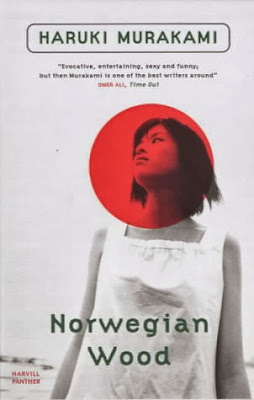 The theme of loss and death is poignant in the book as Toru recalls often his best friend, Kizuki and their idyllic existence together. His death has impacted Toru greatly and he copes with this in the form of flashbacks.
The tale teaches us to let go and learn to take what is in front of us. Toru must decide between Naoko, a woman who probably never loved him and Midori, a woman deeply in love with him. The book is about melancholic and adolescent love, that sometimes lasts and sometimes doesn’t. The pages are often gloomy and sometimes filled with humour and love. The sexuality and morality of the generation is a minor element, but when used has an impact.
“When your feelings build up and harden and die inside, then you’re in big trouble.”
The book and its setting leaves you overwhelmed. The reader is transported in to a different world, where nothing seems real and everything seems ethereal. It feels blank and dream-like, almost mystical. It is like an overgrown thicket, dark and gloomy, with sudden bursts of sunlight. Once the reader is pulled in, it is almost impossible to get out. Murakami’s poetic writing style is evident in this book too, like his other books. The supernatural feature is customary as in all Murakami’s books, but is low-key.
This is deemed as Murakami’s “normal” book, the type you can recommend to everyone. But it isn’t normal at all. The book, in disguise of paper and ink, offers support to anyone who has loved and lost. Murakami’s characters are presented with a choice, but whether they choose to plant the seed of rebirth is unclear. Toru has the choice of being indulged in grief or of falling in love with the vivacious Midori. But in the end, what is does is unclear, just as how Murakami offers to you the path and it is yours to tread on.
“You’re all grown up now, so you have to take responsibility for your choices. Otherwise, you ruin everything”

The writer is a second year Media & Communication student.
Posted by MANIPAL DUBAI BLOG at 10:29 AM