LOL: From Laugh Out Loud to Lord of Lame

LOL- a term so often used that it competes with the term “the" in the world of texting. (trust me, you don’t have to check). You know what the best part is- "LOL" isn't even a REAL word!

At first, it was used to express the fact that something is hilarious and hence the clever abbreviation. Soon it was upgraded as fillers for, umm….hmmm…. you know what I mean, don’t you? You use it too, regardless of how unfunny the conversation is.

I never really got along well with the term LOL nor am I comfortable with the transition of LOL from an emoticon to being part of our verbal conversations. To me, it has always stood as pillar of absolute fake-ness. A fake-emoticon-word that allows the person to fall under the illusion of being interested - in other words, it's a massive cover up. Just the perfect solution for a lot of people in today's millennials generation who have the attention span that lasts for nanoseconds. I wouldn’t be surprised if Facebook came up with an emoticon just for the word LOL (oh, wait don't tell me it already exists). 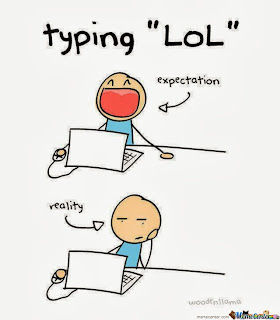 What's not-so-surprisingly, a lot of people don’t even know what LOL stands for and hence they make their own full forms. The most recent one, I've heard around campus is "Lord of Lame" since it sounds "cool" enough to be a part of their conversation.

An example of an annoying ‘LOL’ user text conversation:

With trends produced every second of the day, LOL is no longer a simple LOL. Yes, it's got an upgrade, it's become - LEL.

Imagine my shock, when I realize I have to deal with this term too. Wondering what the hell, LEL is? Well, according to Urban dictionary:

“Unlike what many people think LEL is not an acronym in the same fashion that LOL is (it does not mean laughing extremely loud, laughing extra loud or similar and that’s new for some of us). LEL (and variations including LAL) resulted from the use of random vowels substituted in place of the 'o' in LOL. These vowels were used in an attempt to be different from the millions of internet game fags. The word however, in essence, still means LOL.”

Imagine you say something really funny, and the other person say simply: “LEL”.
*just slam my face on the wall and be gone*

If you are someone who uses the term LEL, please realize how absurd it sounds and really laugh at the poor joke like a normal being.

Seriously, where is your sense of humor?

Do you share Varsha's frustration? Do you think that LOL being overused in online and offline conversations? Do you think it's fair to use LOL when you're not even laughing? Comment below!
Posted by MANIPAL DUBAI BLOG at 9:08 PM