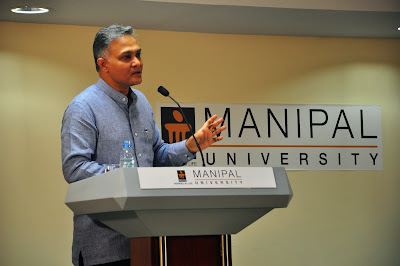 The Department of Media & Communication, Manipal University Dubai was abuzz with excitement and eagerness, as the outgoing Consul General of India, Mr. Sanjay Verma came to the university on Sunday, 22nd of September to give a speech on the Indian media and his take on the journalism scene.


Mr. Verma’s hour long interaction to media students covered his perspective on Indian television and its workings. He also spoke about his playlists and keen interest in international radio shows. He explained the importance of media in society and how agenda setting works in the news industry.

The Consul General also urged students, especially women, to actively get involved in sports. He recollected his experiences playing hockey and being a university-level player.


The session ended with an interactive Q&A, where Mr. Verma answered questions about topics such as media-related politics, and the cultural differences between India and China.


Mr. Verma, who joined the Indian Foreign Service in 1990 as a diplomat, has served in several overseas assignments, such as economic and commercial work in Hong Kong, press, political and consular responsibilities in the Philippines, as well as being a cultural counsellor and secretary of the India-Nepal B. P. Koirala Foundation in Kathmandu, and the Head of the Economic and Commercial Wing in the Indian Embassy in Beijing. He has been appointed as the next Ambassador of India to the Federal Democratic Republic of Ethiopia.


It is rare to find a diplomat who takes time out for students from their busy schedules. We are indeed honoured and privileged to hear his thoughts and insights. We wish him all the very best in his future endeavours.

Posted by MANIPAL DUBAI BLOG at 9:34 AM