The second and third week of October was marked with the celebrations of Navratri, Dushera and Eid. To join in the festivities, Manipal University Dubai held an Inter Department Competition in the following categories: Rangoli, Henna and Hairstyling on 10th October 2013.

The smell of henna tingled my olfactory receptors as soon as I entered the lift to cover the event taking place. As the doors opened, I saw girls fiddling with the henna cones trying to make the best design possible on their model’s hands.

A fresher from Biotechnology Department, Juveria Anjum who was engrossed in creating an orient design on her model Salma Siddiqa’s hand said that Henna helps her in bringing out the creative energy within her. 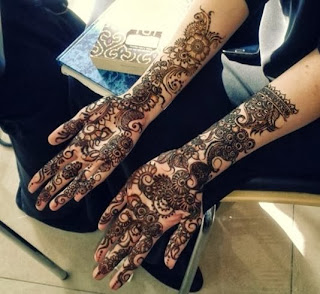 Heading towards Rangoli section, I saw an absolute rainbow of colours which was a pleasure to the eyes.

The Rangoli section bought about a lot of innovative ideas. For instance, a group from BBA Department, Amrit, Sakina, Natasha and Akansha were trying to highlight a social problem of female infanticide through their art. 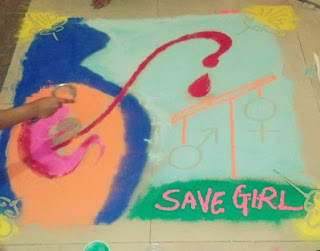 Freshers from the Media section, Ralitsa, Fatima, Anmol and Kanika were asserting their identity as Media students and created a film reel. 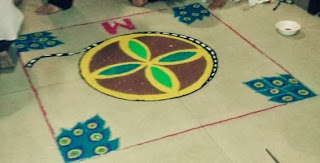 While, Meghna, Kavya, Mrinali and Sara from Biotechnology Department tried to enlighten the need for peace in today’s world through their Rangoli. 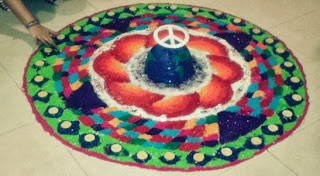 Trishna, Bhavya, Limea and Indu from Engineering department (2nd year) created a Rangoli with an Indian theme.It sported a peacock to symbolize the whole of India. Since Rangoli has its roots from North India, they created a boat in between their design to show collaboration between north and south India. 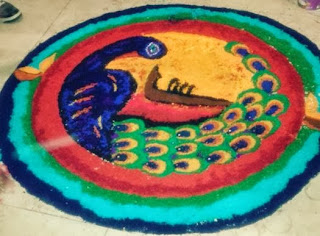 Sanjana, Sharon and Amina from the BBA department however chose to be economical and used sand to make their rangoli. They said that they wanted to try something different from others. 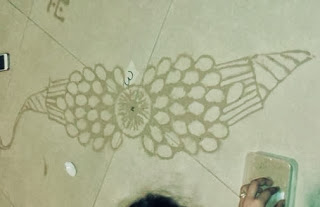 This inter-department competition served as a platform and outlet for the creative energy among students, conveyed messages towards gender equality, peace and beauty in diversity. It also helped to build a spirit of competitive spirit among students.

it was an amazing day...n this report has the full essence of tht day..keep up the wrk!! :)

it was an amazing day...n u have the full essence of it in your report..keep going dear!! :)

Good Blog sir... your blog is very helpful.. I am happy to find this post very useful for me, as it contains lot of information.