Home » Mario Cacciotolo » photography » project » social media » Someone Once Told Me » SOTM » twitter » worldwide » What’s the most memorable thing you’ve ever been told?

What’s the most memorable thing you’ve ever been told?

It’s not every day that someone would take a year off from their job to travel across the globe, and pursue a long-held passion of telling stories. But London-based BBC journalist Mario Cacciotolo decided to pack his bags and take his pet photography project ‘Someone Once Told Me’ on a world tour.

‘Someone Once Told Me’ (SOTM) commenced in 2007, and catalogues different individuals and what ‘someone once told them’. In short, a person holds up a large piece of paper, upon which they write something memorable that someone once told them, that has impacted them greatly in their lives at that point of time, and in the future. Mario then clicks a black-and-white photograph of them, records a sound byte of the story behind the quote, and uploads both on the project’s official website. The project has been running for over 2000 days, with seven new photographs being posted every Friday.

Mario started SOTM from London, working on it for an entire year before the website went live on the internet. After that, he continued to take short trips to different places in order to collect stories from different people. He also backpacked across India, to places such as Delhi, Rajasthan, Agra and Mumbai, where he found 88 individuals for SOTM.  But it was only recently that he decided to go on the road, taking the project with him. He has been to places such as Paris, Geneva, Bologna, Vienna, Malta, Istanbul and Cape Town. He will be spending the next four months in Asia, visiting countries such as Japan and South Korea. 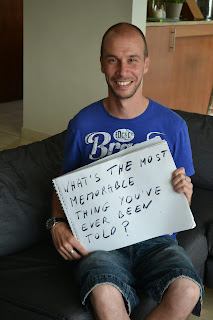 So how did the project originate? “I’ve really liked the idea of people telling stories among themselves, and I’ve always enjoyed the art of storytelling,” Mario says.

“In England, we have a saying that goes ‘everyone has a book inside them’. I don’t agree with this, because it’s a very complicated thing. However, I do believe that people have stories. Everyone has a story to tell about themselves, something they’ve experienced. I started to think, how can I capture these stories from different people? I was getting into photography for the first time, seven years ago. It’s a hobby, and I’m very passionate about it. So I thought that this would be the best way to do it,”

When asked about the inspiration behind SOTM, Mario says, “Somebody I didn’t know very well paid me a small compliment, and I thought that was nice of them. I was going to keep this compliment in my mind for the rest of the day, to keep myself in a positive frame of mind. That was the trigger point. I don’t know why, but I started thinking that everyone is told things every single day, and some of it sticks with them. I thought it would be interesting that people could pick that one thing they’ve been told, something that has stuck with them,”

One of the best things for Mario about SOTM is that some of the people who take part in the project have a story that they haven’t revealed to anyone before.

“Quite a few of these people have used this as a confession, or sort of cathartic tool,” he says. They haven’t shared it with anyone before me, and they use it as a way to get something off their chest. It may not have come up in their conversations with other people but it has stuck with them, and they only reveal it when a pen and paper is thrust at them,”

If you would like to know more about the project, you can follow the world tour and even submit your own SOTM story on the official website (someoneoncetoldme.com). You can also follow Mario on Twitter @SOTMario, and get in touch with him about the project.

By Lavanya Narayan
The writer is a final year Media & Communication student specializing in Journalism
Posted by MANIPAL DUBAI BLOG at 1:38 PM