I remember how I was asked to write an essay on ‘Life without cricket,’ as a child. ‘Everyone wants to be like Sachin’ read one sentence. ‘Sachin is the best, forget the rest,’ read another. Almost every sentence of mine had the name Sachin Tendulkar in it. That is solely because, for us Indians, Sachin is cricket.

I remember how my brother used to watch Sachin’s matches even during his exams.  He would have his books in his hands, but his eyes remained glued to the television, biting his nails, literally screaming at the bowler who got Sachin out, as if he was actually in the stadium!!

Sachin Tendulkar has served India a platter of victory, glory, excitement and pride since the past 24 years.  Thousands wept upon his retirement, as a legend just signed off from the sport that brought India so much glory and fame that there were demands to convert cricket into our national sport. Other cricketers have a past but Sachin Tendulkar has made history. 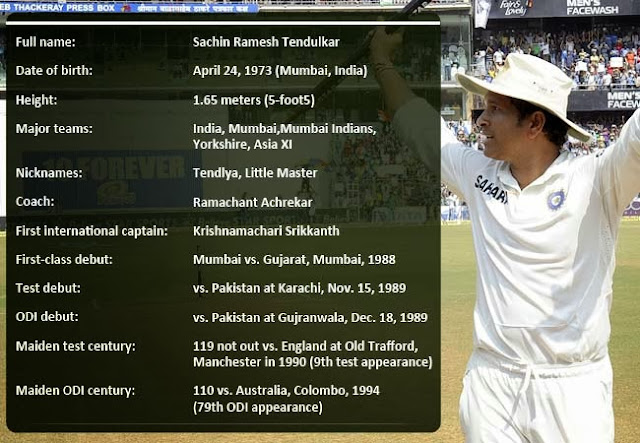 Master Blaster, God of cricket - he has been bestowed with many titles by his loving fans. He is one man who has been consistently serving the nation without any controversial issues throughout his 24 year journey. This is truly because he loves his work and his people. He binds together people from different religions and cultures who want to watch their hero win for the nation. Each word spoken by him in his farewell speech was recorded and can now be found all over the internet!!

The best way India could thank him for all that he has given to us is probably by bestowing him with the Bharat Ratna, which marked him as the 1st sportsperson to be awarded with this prestigious award. He has not only won many laurels but has also won many hearts, because of the calm, composed and down to Earth person that he is.

For a nation where Sachin Tendulkar is the first and probably only name that springs up when Cricket is talked about, it is going to be really difficult to watch a match without the Master Blaster on the field. The eyes are still going to search for the legend and the hands would still itch to clap for him.

Yes, Facebook is going to be filled with Sachin statuses on the special day. And I'm sure nobody can ask us to stop or put up statuses saying, 'Brace yourselves, Sachin Tendulkar posts are coming' because today, everyone wants to thank their God for blessing them with 24 years of brilliance and perfection !!!  Today, many eyes were numb, many hearts broken and surely many throats were sore, after screaming out 'SACHIN SACHIN' ONE.LAST TIME !!

He has been an inspiration for many, a God for all, which is probably why when he had a tear in his eye, thousands wept.


Despite being a star of such high order, he did not forget his values and thanked everyone who contributed to his success, giving a special mention to even the photographers and doctors who are usually overlooked.

His presence was enough to silence the public who stood up in respect and held on to each word he uttered. There was hardly anybody in the stadium who did not shed a tear as the legend walked out of the stadium with tears in his eyes and many memories in his heart.

Thank you, Sachin for entertaining us with pure cricket throughout these years.