Inside a Laptop: IEEE Workshop success

The workshop titled 'Inside a Laptop’ was aimed exclusively at the IEEE student members of the university and was organized by the student branch Vice President, Mr Madhur Tipnis with the help of a student organizing committee members namely Muhamed Fuzail, Sonali Seth and Aishwarya Kumar. All these students are IEEE members and Manipal University CISCO Networking Academy - IT Essentials certified students.  Over 16 members were in attendance, making the workshop a success. 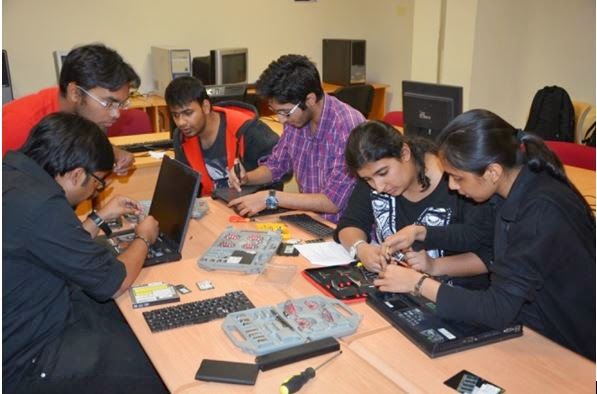 The workshop was inaugurated by the branch counsellor and CISCO Networking Academy Instructor Prof M I Jawid Nazir, which was followed by a presentation by the organizing committee about the various aspects that set apart the internal components of a laptop computer, from that of a desktop computers.

Attendees were made aware of different form factors and correct procedures to go about dismantling a laptop. All of the internal components were described thoroughly. An instruction manual was put together chronicling the steps that go into taking apart a laptop, and putting it back together, and was circulated among the participating students so that they could begin their hands on work with the laptops that were provided to them in the lab.

Four teams of approximately five members each worked on one or more laptops with the toolkits that were also provided to them by the organizing committee.  The mentor and the organizing committee conducted regular walk around to make sure that the workshop progressed without a hitch, occasionally lending a hand or guidance to the participating members.

The workshop was therefore a successful venture and it was hopefully an educative and informational session for the participating members, just as much as it was a fulfilling event for the organizing staff. The IEEE Student branch thanks the School of Engineering and IT Chairperson Dr S K Pandey for his constant support and encouragement in conducting such events.

By Madhur Tipnis
Posted by MANIPAL DUBAI BLOG at 1:11 PM