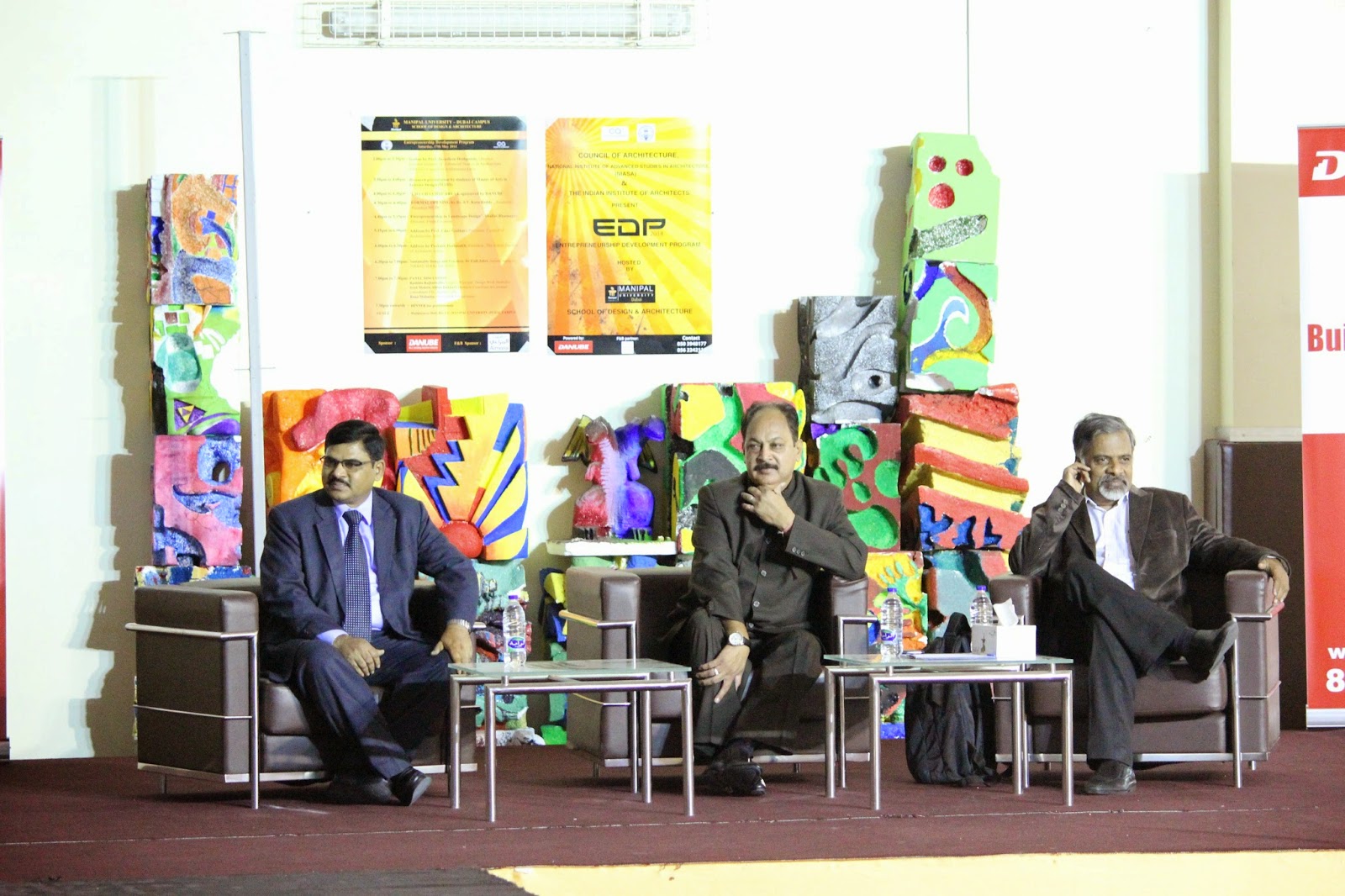 School of Design and Architecture, Manipal University Dubai (MUDC), hosted the Entrepreneurship development program (EDP) under the auspices of the Council of Architecture, India and The Indian Institute of Architects. It was a two day event attended by several dignitaries, entrepreneurs, professionals (architects, engineers and interior designers), academicians, experts and students. A display of student academic work, open to all was also held parallel to the event. The coordinators for the event were Prof. Bhakti More and Prof. Niva Mahanta.

Thursday 15th May 2014, the first day of the event began with a motivating talk titled ‘Graduate to CEO,’ by Mr. Ravi Panchanadan, our CEO (Middle East and Africa), Manipal Global in which he traced his growth from a graduate engineer to CEO.

Mr. Rizwan Sajan, Founder and Chairman, Danube group, who spoke next, interacted with the audience in an interview format conducted by Mrs. Sara Merchant (full-time adjunct faculty-SDA). He charmed the audience with his down to earth friendly demeanor and humorous anecdotes, while tracing his journey as an entrepreneur from humble beginnings, to a leading business owner that he is today. The second day of the event, Saturday 17th May started by a session by Prof. Jayashree Deshpande, Director, National Institute of Advanced studies in Architecture (NIASA), Council of Architecture, India. In her session she spoke about entrepreneurship as a wealth creating opportunity, the requisites being a combination of dreams, focus, and innovation with leadership qualities. This was followed by a demonstration of the six thinking hats technique as proposed by Edward De Bono in his book of the same name. The demonstration included participation from students (Miss Shwetha Gandhi and Mr. Dhruv Parekh), academicians (Mrs. Vidya Rao-SDA and Mrs. Violetta Verona-Canadian University) and a practicing designer-visiting consultant-SDA (Mr. Vinod Pillai).

The Students of Master of Arts in Interior Design (MAID) presented their work in the internationally renowned Pecha-Kucha format. Their work was critiqued and evaluated by Prof. Mehdi Sabet – Zayed University.

Dr. S.V.Kota Reddy, our Academic President, MUDC formally opened the event and spoke about entrepreneurship and the very important role played by professional societies. In his address the Guest of Honor, Architect Prakash Deshmukh, President, The Indian Institute of Architects, India, spoke about entrepreneurship, global role of architects and the multidisciplinary nature of architecture.

The dignitaries commended Manipal University for being the first in the region to host the EDP program. Shalini Bhatnagar, Director, Fiona Environs shared her experiences in her talk “Entrepreneurship in Landscape Design”. Dr Fadi Jabri, General Manager, Nikken Sekki Ltd. Dubai spoke about Sustainable Design and Practices. His talk covering sustainable developments both in Japan and Dubai had the audience in rapt attention. The university was specially honored by the presence of Architect Mitsuo Nakamura, Chairman Nikken Sekki.

A Panel discussion by practicing design consultants in the UAE was next. Participants in the panel were legal expert, Mr. Syed Mohsin Abbas Bukhari, Senior Business Consultant at Lawman Consultants FZC, Ajman, UAE; Architect, entrepreneur Mr. Rana Mahanta and interior designer, entrepreneur Mrs. Rashida Rajkotwala, Creative Principal, Design Work Portfolio. In the very interesting discussion that ensued audience were enlightened about handling the trials and tribulations of entrepreneurship. Mrs. Shruti Jeevraj, Placements & Alumni Officer, MUDC presented the vision of the university with reference to the interface between academia and industry through internships and placements for the students of the university and the role of alumni in taking this noble vision forward.

The Chairperson-SDA thanked the dignitaries, experts, audience and members of his organizing team which included faculty members and students of MUDC. Visiting experts and dignitaries were given mementos designed and made by students which were specially appreciated by all. Over hundred industry professionals and academicians from various universities attended the event. The event was followed by a networking dinner for professionals.

On 19th of May, Ar. Prakash Deshmukh, President, the Indian Institute of Architects, India and Architect, Prof. Uday Gadkari, President, Council of Architecture, India visited MUDC and the School and were taken on a tour of the university. They then had a student-only interaction for close to an hour which was an enriching session for the students of SDA. This was followed by an interaction over lunch with Dr. S.V. Kota Reddy, Academic President, MUDC, Mr. Ravi Panchanadan, CEO (MENA), Chairpersons of various schools and departments of MUDC, and the Faculty of SDA. The visiting dignitaries appreciated MUDC and the people all involved in making the event a success in their parting talk before leaving to India.

Education in Dubai is home to a number of internationally accredited colleges and universities, training institutes and other approved providers offering top quality education.