Hrithik’s back with a…. ‘BANG BANG’

Post the split with ex wife, Suzanne Roshan, it seems like the star Hrithik Roshan is in high spirits! He’s definitely got a lot on his plate. Come 2nd October and Hrithik’s fans will see him weave his magic yet again with co-star Katrina Kaif in his upcoming and much awaited flick, Bang Bang! 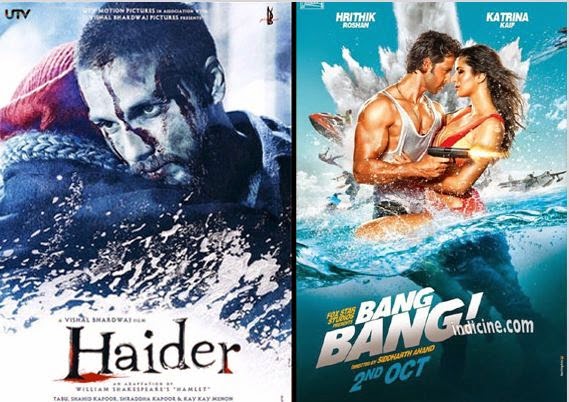 We bring you the top 5 reasons why you should spend your October 2nd watching Bang Bang!

1.  The songs and the dance have been the talk of B’town lately. The soundtrack of the film has only upped everyone’s expectations about the film. Songs like Tu Meri,Bang Bang (title track) and Meherbaan have received a great response. If you are a fan of the actor, you probably have already watched the title track of the movie and are probably already enamoured by the tribute the Greek God paid to his idol Michael Jackson in the song, with a little of his own style.

2.  The action has to be exceptional when the movie stars Hrithik Roshan. A sneak peak into the trailer is enough to guess that this movie is going to leave us at the edge of our seats with its action packed sequences!

3. The lead pair caught everyone’s eye in Zoya Akhtar’s Zindagi Naa Milegi Dobara and their chemistry was talked about by everyone. Their fans would surely love to see them revive the magic in Bang Bang!

4. You’ll feel closer to home! Yes, for those who do not know, parts of this movie have been shot in the capital of UAE, Abu Dhabi, so all those residing in the capital, make sure you watch this one!

5. Based on Hollywood film ‘Knight and Day’ Nowadays, almost every movie is either a remake or a copy and this one is no exception! It was based on the Tom Cruise and Cameron Diaz action comedy which was a success and raved great reviews so we don’t see how this wouldn’t!

It’s a war between Haider and Bang Bang this time that would be competing for their audience’s attention on October 2nd. It’s a clash between the powerhouses of Bollywood: Shahid Kapoor and Hrithik Roshan.

October 2nd would decide which of these dancing stars dances their way to the box office! What’s common is that both the actors would be hitting the big screens after what seemed like a hiatus (Krrish 3 isn’t included obviously!) Here’s wishing both the actors success after all the harsh times they have seen.

Bang Bang is slated to release on October 2nd 2014.

The writer is a second year undergraduate student in the School of Media & Communication.
Posted by MANIPAL DUBAI BLOG at 7:03 PM