Female objectification is a sentiment salient to feminist theory, concerned with treating women as merely a commodity to satiate carnal gratification. We are constantly engulfed in myriads of pictures and illustrations of women portrayed on Television, in magazines, comic books, video games, calendars, and pin-ups that have devoured the actuality of women to just parts of her body, overlooking the fact that she is also a human being.

A human being endowed with a personality, values, beliefs, and emotions similar to her male counterpart. Whilst most feminists condemn the practice, there are contradicting viewpoints from some media critics who debate that it is in fact an expression that denotes women’s empowerment over men and a way of celebrating her beauty.

In fact, as recent as Sunday, 14th of September, a post by the leading and eminent Indian newspaper The Times of India involving prominent Bollywood female actress Deepika Padukone rampaged the Twitter boards with condemnation towards the attack and support towards the young actress.The post showcased a sleazy gallery of cleavage-bearing images of the poised actress captioned with a reprehensible headline.


The appalled actress refused to be victimized by a cheap stunt of objectification pulled by the paper and stood her ground on women empowerment. She valiantly rebuked to the heinous act by saying: 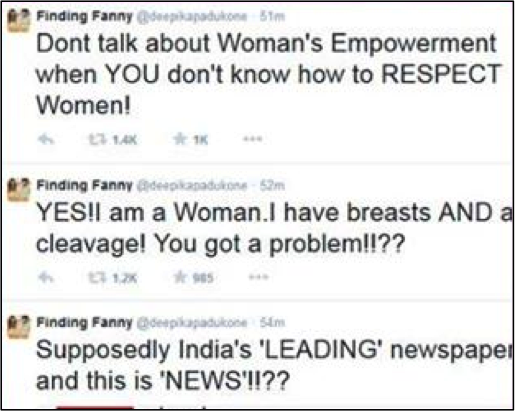 Although there were several comments criticizing the actress regarding the attire she donned in the photographs, Deepika received accolades from multitudes of fans and peers on her statements.  The defense to the actresses’ retort was a pathetic attempt by the paper and did not manage to iron out their sordid act.

The strong and opinionated Indian actress also displayed valour and support towards former Indian child actress Shweta Basu Prasad just earlier this month when she was austerely targeted in a prostitution scandal involving top businessmen who were obscured from the media. She believes that instead of shunning the vulnerable actress, people should get together and support her. They should also question the people who hired the actress and engaged in the act, as they are equally liable and should be the ones disposed on the receiving end.

Deepika Padukone has become sort of an icon for many young women today who are being constantly victimized and objectified by social media platforms. The rapid growth in such brazen objectification is not only corroding our society but also threatening the sanctity of humankind. It has already augmented the chances of creating a climate wherein people have become tolerant towards exploitation of women for selfish motives.

Times of India is just a latest example that tried to create controversy regarding an attractive and popular woman in order to increase their readership and profits. Such deceptions happen all the time on social media platforms and it is solely in our power to diminish such antics – SPEAK UP AGAINST WOMAN OBJECTIFICATION!

The writer is a final year undergraduate student in the School of Media & Communication specializing in Journalism.