The workshop was aimed not only for IEEE student members but also was kept open to non-members and was organized by the student member Sahil Rashid Mir with the help of student organizing committee members Shashidhar Mangam, Stanley Baroi, Aashish Salian and Faizan Jami. Over 18 students attended the workshop and returned 100% positive feedback, making the workshop a success.

Solidworks is a solid modelling CAD (computer-aided design) software, one of the most user friendly and affordable in the market. It has a wide range of applications such designing prototypes, finite element analysis, 3D printing and its also used for many school and university level competitions such as F1 in schools and SAE collegiate design series. 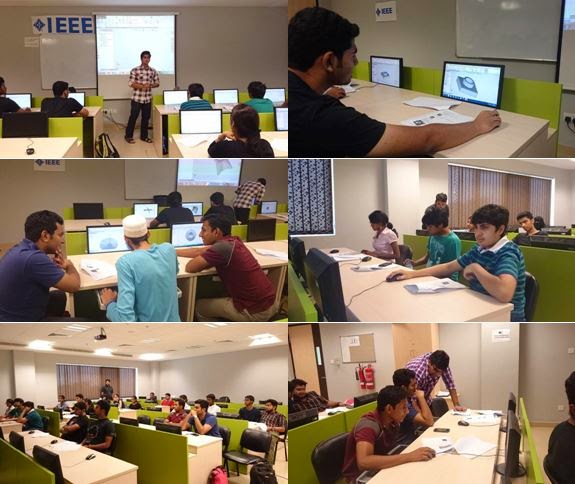 The workshop accomplished in bringing students with common interest together and teach them the basics of 3D modelling with solidworks CAD software. This in turn will help the students to gain interest in learning and also help them in a better presentation of their future projects or ideas

The workshop was inaugurated by the branch counsellor Prof. M I Jawid Nazir and Faculty-Coordinator  Prof. Abdulla K.P., which was followed by the introduction of 3D modelling and its benefits as an engineer, by Sahil Rashid Mir. The exercise sheet was handed over to the participating students and were familiarized with the most basic setup and tools of the software by following the trainer as he designed a very basic 3D model using all the basic tools, the committee members guided the participants with any difficulties faced, after which the attendees were asked to design an important component of a 3D printer, followed by the demo of the application of the component.