Don't let the title confuse you. Understanding and discussing the intricacies involved in filmmaking is no child's play and five minutes is too less to discuss the filmmaking process.

Writer and director Sandeep Sukumaran, Actor Ashwin Kkumar and Director of Photography, Titoni Thomas screened their short film '5 minutes' and later addressed the students of the School of Media and Communication, in a session conducted on 1 December, 2015.

Some of the key issues highlighted in the film were the need to set priorities straight and make time for those who matter the most. With over 9000 views on Youtube, the elated director, who also penned and produced this project, said: "This film is the result of our team's hardwork over two years. I wrote the script in 2013 and the first person who came to mind for the lead role was Ashwin."

The independent filmmakers shared their journey and the challenges they overcame, serving as an inspiration to students. With a desire to translate their passion on screen, the team manages to scoop out and make time for filmmaking, despite their eight-to-five jobs.

"This project is merely a coincidence of our free time," said Kkumar, who is a Manipal University Dubai alumnus.

'5 minutes' has opened doors and paved the road to many more offers and opportunities for the team. This is only the beginning. "Although I have done videos before, this is my first short film; something that I'm really proud of. '5 minutes', led me to my first feature film." Said Thomas. 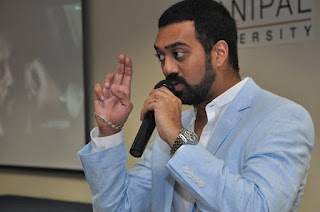 The '5 minutes' journey however, lasted a very long time with various obstacles on the way. It is truly said, "No pain, no gain". The faces behind the project can vouch for the same. "This is undoubtedly the best free course I could have done on filmmaking", said Sukumaran, referring to the lessons he took back from the project.

Budding filmmakers and film enthusiasts posed questions to the team in an interesting question-and-answer session that cleared doubts about the technicalities, funding, and the production process."It was my deliberate attempt to keep the shadows and not eliminate them. Shadows accentuated the character and gave some depth to it." Said Thomas.

Kkumar, who also enjoys mimicry among his other passions, was more than happy to entertain requests."Farhan Akhtar, Shah Rukh Khan, Nana Patekar!", called out an excited audience to his impersonations.

The artists concluded their session with the advice to take criticism in one's stride, because it will only escalate growth.

By Disha Dadlani
The writer is a final year Media and Communication student, specializing in Journalism.