Miss Sloane is cold in its treatment yet shocks you with the end. The storytelling is compelling and Jessica Chastain shines throughout the film. Beneath her power suits is a woman who plays to win; there is no history of a sad childhood or trauma that drives her propaganda save for her quest to achieve victory. 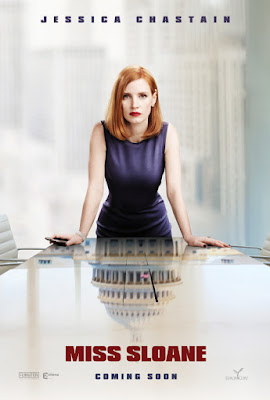 Director John Madden delivers a unique take that departs from his previous ventures. None of the characters are overplayed or underwritten. What this movie misses is perhaps a deeper insight into Miss Sloane's background, but even without one she does just fine. Although a Box Office Bomb, the movie does manage to whisk away a Golden Globe nomination for Best Actress. The movie was emotional throughout its complexity and plays on the cold heartedness of the American  political system. The manipulation of the head of states makes you question all that you know of the government and how people are willing to risk the safety of others for their profit. The film makes you think twice before putting your faith into the system and also puts forth the thought of how manipulation of the system works in such cases involving powerful gun lobbyists.

The concepts of freedom vs rational thought leave viewers stunned at their seats , pondering over thoughts of greater and complex dimensions leading to what critics may term, "a crappy ending". This was probably one of the reasons for its overall poor reception by the public.