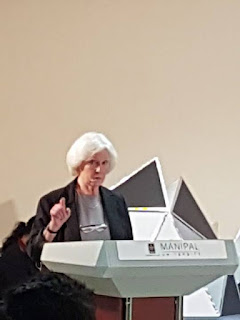 At the conference, Creedon presented statistics comparing Twitter handles of major sporting leagues in the US. Statistics showed that NBA had 24.9 million followers while WNBA has a following of only 533,000. Whereas, NFL had a following of 21.8 million while WFA had a following of only 2,589. She also presented statistics about gender in sports media saying 'As of 2011, 94% of sports editors are men while 89% of reports are men.” On that, she commented about women “adapting a masculine form of writing.”

She also stated about the 2012 Olympics, “63% of followers went online for updates on Olympics”

“Users aren't only cosumers of content, they are users and producers”, she added, in the context of people following sports in media.